„It´s necessary not to overload a puppy“ we may often hear. But what does it actually mean? How much physical activity is fine and how much is too much?

In this article we present our principles for the ideal amount of physical activity for puppies and young growing dogs. It also lists the main risks of overloading them.

We hope that the article may help someone determine a healthy level of physical activity for their puppy. 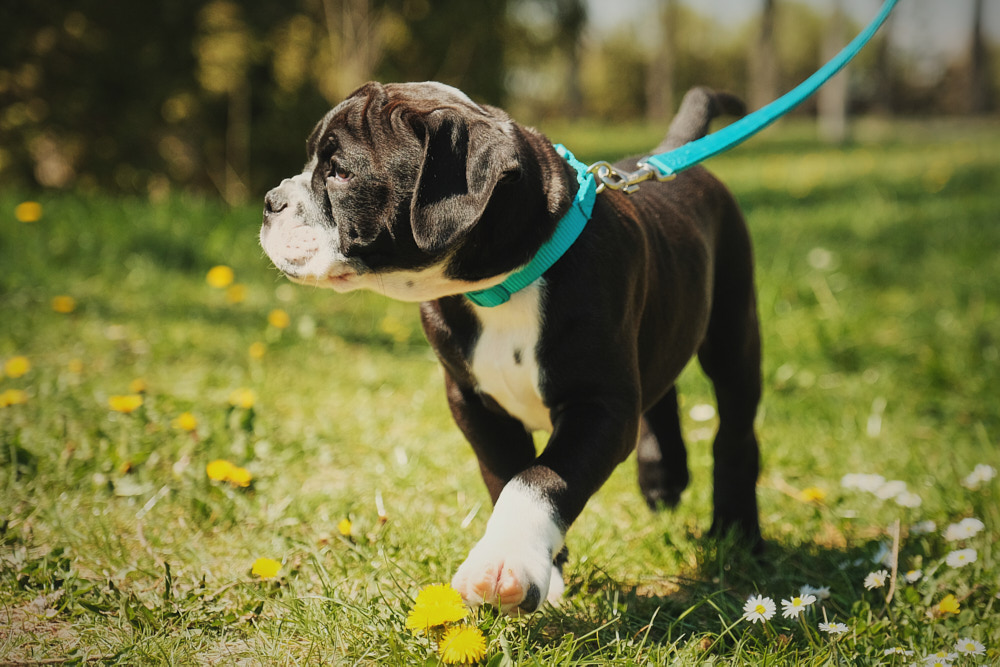 Matilda, Kaia and a puller

Amsterdam is in his new home

Puppy and physical activity - how not to overload 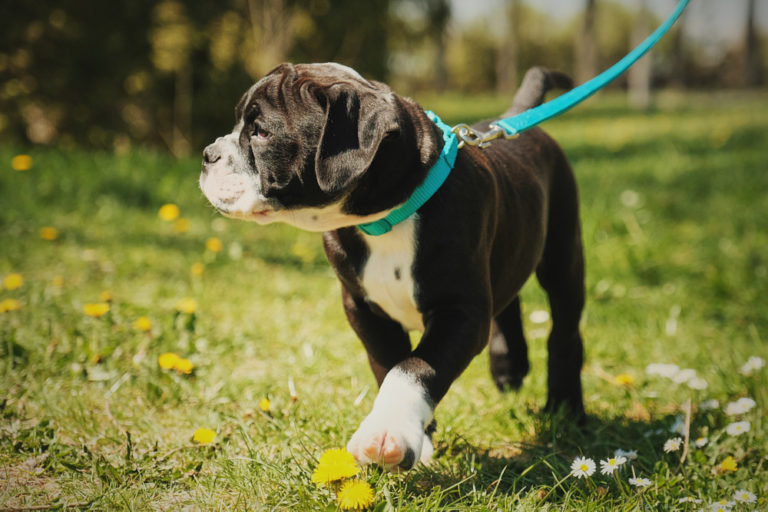 We often read information such as “physical activity needs to be adapted to a puppy” or “it is important not to physically overload a puppy”, but what does this actually mean in practice? How much physical activity is fine and how much is too much? As with humans, all dogs are different, and therefore there are no exact tables for an ideal level of physical activity. Nevertheless, in this short article we will try to state simply and clearly the amount of movement for puppies that we consider appropriate. And also what we already consider to be overloading. 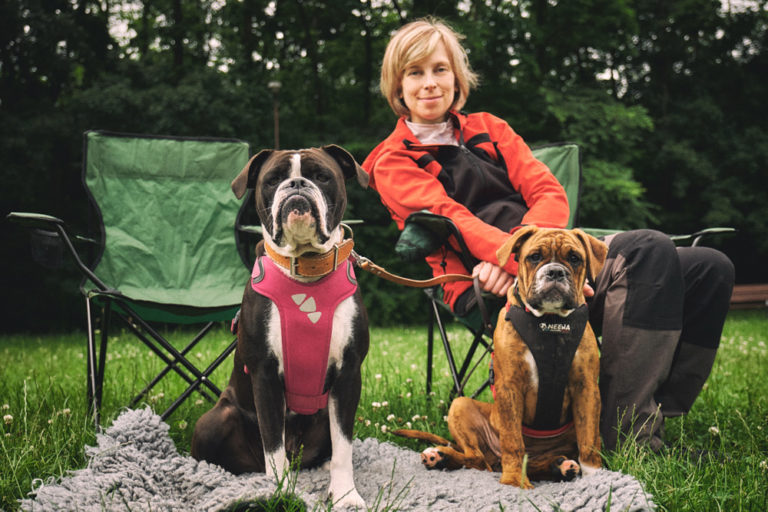 How is a puppy different from an adult dog?

Continental Bulldog is a molossoid breed, i.e. a dog with a heavier body structure and a strong skeleton. Therefore, it is appropriate to pay great attention to the physical activity in puppy age. The period of changing teeth and the greatest growth, roughly between 3 – 10 months of age, is the most critical for a puppy in terms of proper nutrition (more info:  Dog nutrition – how to feed a Continental Bulldog?), but also in terms of the appropriate type and amount of physical activity. A familiy takes over their new family member from a breeder usually at the age of about 2 months, when it is still a tiny cute teddy bear, but which will soon grow to its final height by the age of about 10 months.

Dog’s physical growth is very rapid. If we look at a puppy that is 9 months old, we can see a long-legged long-eared creature. Even at the age of one year, a puppy´s movement is not as firm and steady as the movement of an adult dog is. Why is it?

A puppy will first grow to height and length, only then will it slowly begin to thicken. The age of 18 months can be considered physical adulthood. However, a Continental Bulldog will not reach the final adult body structure until about 3 years old. And because at puppy age everything first “stretches ” (total height, length of limbs, length of snout and length of ears) and only later strengthens and thickens, it results in excessive load on all joints and ligaments during movement of a puppy. The musculature, which in adult age easily holds all the joints firmly together and effectively prevents overload, is not so strong and firm yet in the case of puppies and growing dogs. Therefore, the risk of injuries associated with the musculoskeletal system is much higher than with adult dogs. Physically, a puppy is far from being able to handle what an adult dog is. But puppies and teenage dogs are convinced of the opposite… 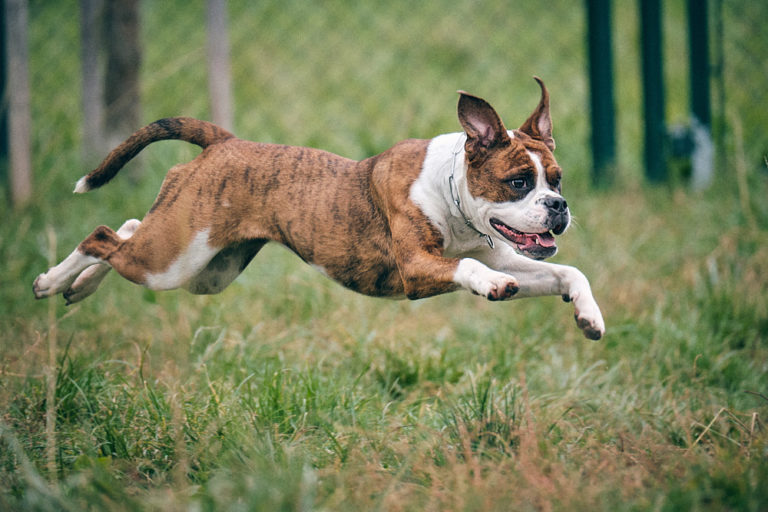 When a family brings home the cute, cheerful, but also frightened little one, in most cases they don´t undertake any devilishly demanding events or hiking in the mountains. But as the puppy grows, it dares to load more and more, looks less and less like that cute puppy and more and more like an adult dog. And the family often forget that they still have a puppy at home and start behaving as if they had an adult dog at home. They go on longer and longer trips, let the puppy fool around for hours with other dogs, and often start doing sports with the puppy. “The dog is fine, it´s having fun, doesn´t limp at all and loves to be active. So what’s the problem? ”As stated at the beginning of the article, every dog is different, so it doesn’t have to be a problem. But it can be.

Probably the most common injury caused by excessive physical activity of Continental Bulldog puppies is broken knee ligaments. This injury is insidious for several reasons. There is no way to see this injury coming in advance, we notice it suddenly as the puppy has difficulties to stand up or starts limping. Another reason is that once this injury occurs, it can´t be resolved by giving the puppy a rest, this injury can´t be revoked. Conservative treatment is often ineffective so a surgical treatment is necessary, with long convalescence. The price of the treatment, which can exceed the purchase price of the puppy, is certainly unpleasant for the owners. And it is important to mention the fact that during the period of convalescence the dog puts more strain on the healthy leg, therefore the knee ligaments of the healthy leg often break too.

The second common risk of puppies´ excessive physical activity is a worsened degree of dysplasia of hip joints (or even elbows). The joints and ligaments are not yet completely mature, moreover they do not have as much support in musculature as in adult dogs. The result of high stress can be excessive wear of the joints, worsening of the degree of dysplasia, in addition there´s the associated increased risk of developing painful osteoarthritis or its development at an earlier age than usual.

Of course, there are many more movement difficulties caused by excessive load of physical activity, whether it is injured tendons, inflammation of the musculoskeletal system and more. It´s certainly not worth it to downplay any of the risks, whether because of the belief in “it most probably won’t happen to us, we don’t do any terrible physical activities and sport is healthy for any dog”, or even if we know a few other Continental Bulldog owners who “went for long hikes and let the puppy fool around with other dogs for hours and hours, now the dog is three years old and is completely fine “. Also, we must not forget that owners often have no need or reason to debate their dog’s health problems in public. 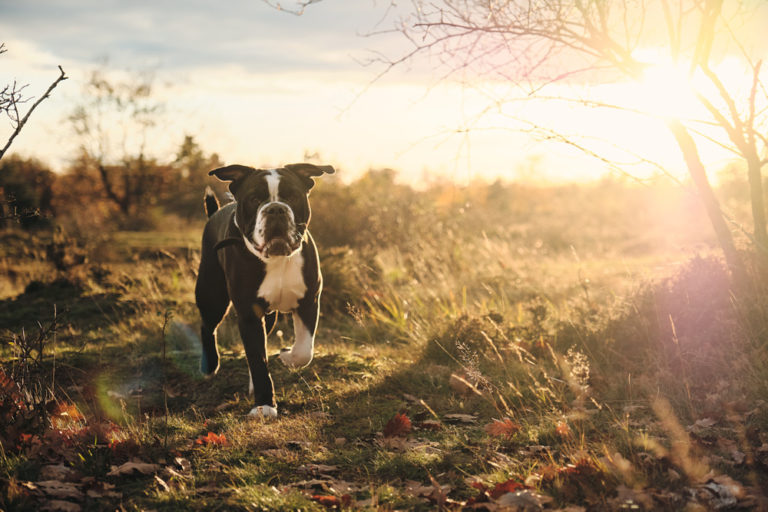 How not to overload a puppy?

And we´re getting to the most important part. What is an apropriate injury prevention? And how much movement is fine for a puppy so that we don’t overload them? We discuss this topic in great detail and carefully with families who are interested in a puppy from our kennel. In this article, we will try to be as concise as possible for clarity, although it is not entirely possible. It is true that each puppy is individual, but in our breeding we generally strive to observe the following rules. 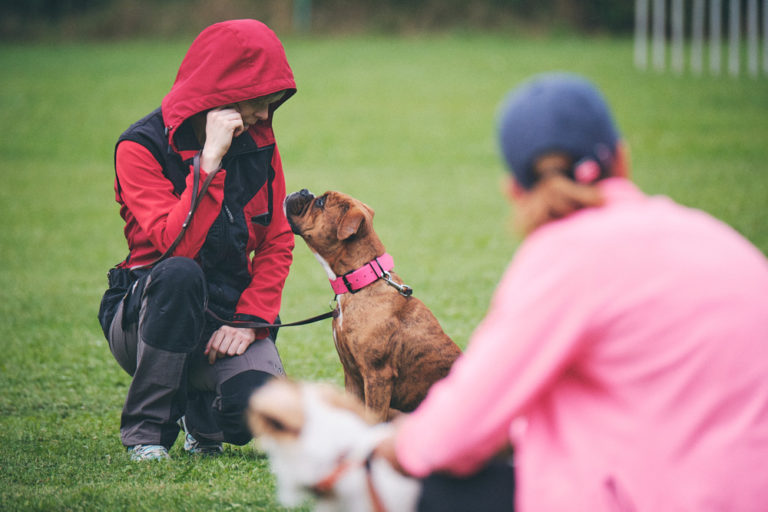 The ideal amount of physical activity 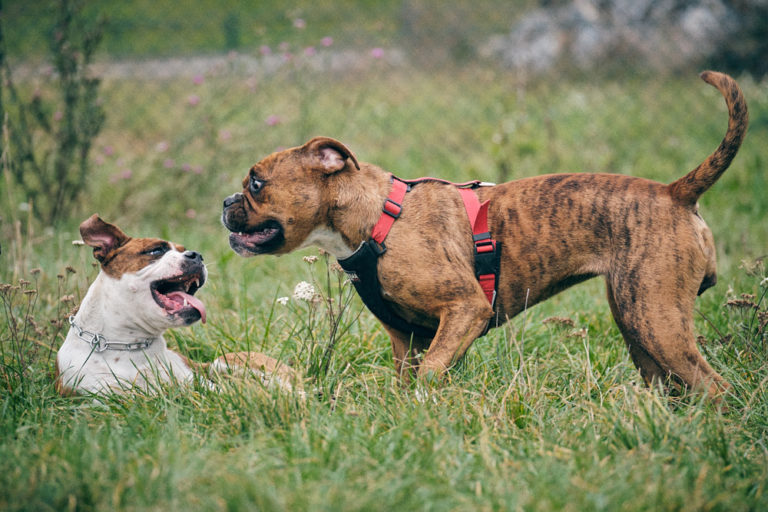 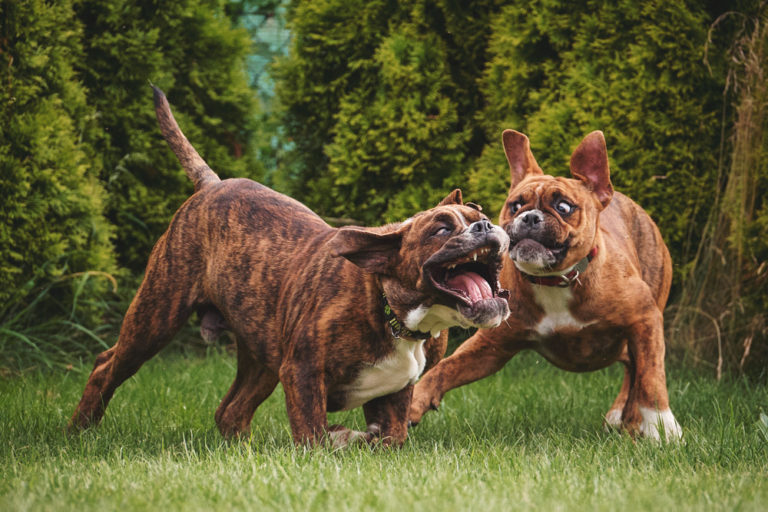 Other principles of prevention

Every dog is different, every “dog family” have their own lifestyle and different habits. When bringing a new family member home, however, it is necessary to initially adapt to them and do our best for their healthy development and future well-being. After all, Continental Bulldogs normally live to a fairly old age, so there is no hurry. As soon as our dog reaches adulthood, it is possible to start increasing the physical condition and add excercises and sports activities according to our dog´s taste, endurance and actual health condition. The first 18 months of our puppy’s life will pass before we even notice it, and if we don’t make unnecessary mistakes, there is a good chance that the next many years will be cheerful and relaxed. In the end, that is why we choose Continental Bulldogs, isn´t it – to live comfortably with them, to experience the common joy of everyday life, but also to let them cheer us up with their pigheadedness and craziness. And for all of that, we need them to be vital and healthy. 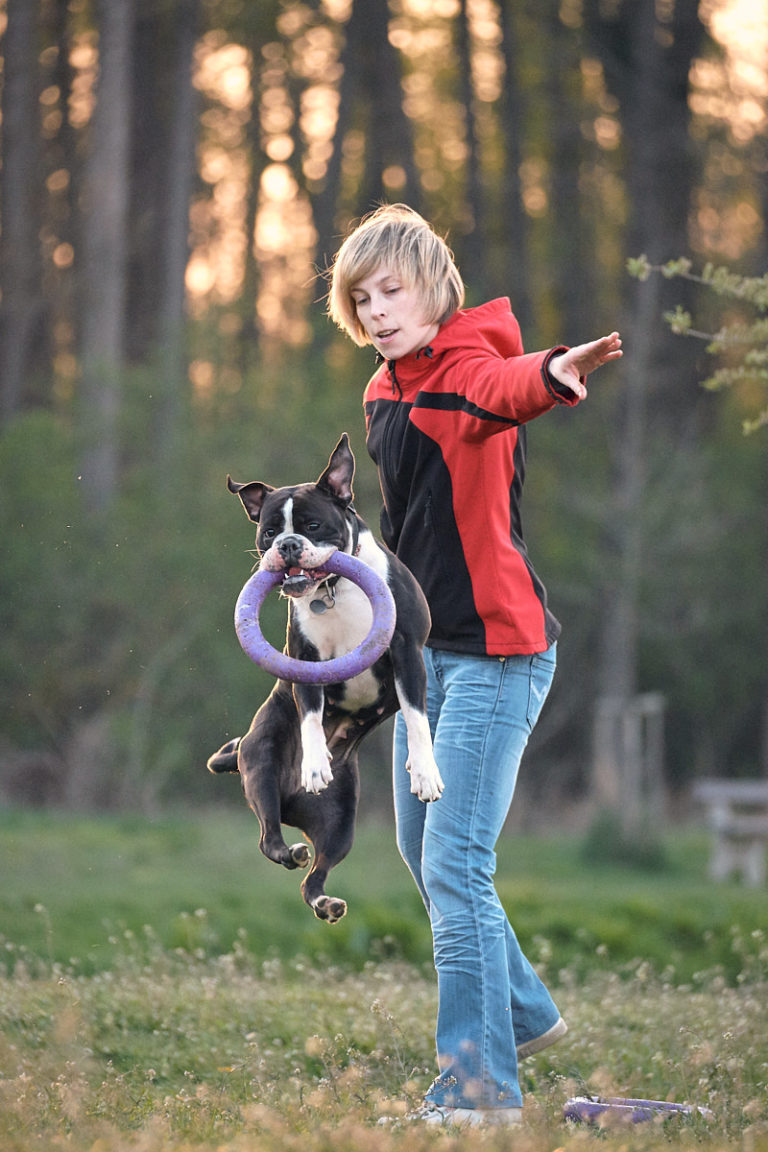